A brief history of
Adam Branch (in third person!) 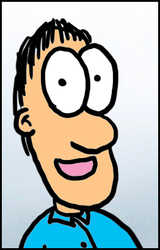 Adam Branch was born on the 3rd of October, 1990 in Launceston, Tasmania. The first 16 years of his life was spent living in the small rural community of Ringarooma, Tasmania, attending Ringarooma Primary School from 1994-2002, and Scottsdale High School from 2003-2006. During this time he began to develop his artistic abilities, beginning with drawing and sketching. Adam’s drawing skills were apparent from an early age and with encouragement from his peers, chose to pursue this as something he would want to do for the rest of his life.

Adam specialised in cartoons, and his drawing style begun to reflect that. His early ambitions were to draw cartoons for a living, drawing both existing characters, and characters he had created. During high school, his dream became a reality as he collaborated with a local author in Scottsdale, and created a comic strip titled ‘Bogan’s Corner.’ It was published in the local newspaper, The North Eastern Advertiser, from early 2006 to late 2007. During this time Adam considered his future as an artist, and decided the best course of action was to study graphic design, as it was both a viable way of expressing himself creatively, and a suitable career path for his future.

After enrolling in Launceston College, Adam began his graphic design calling. He was enrolled in both level four and pre-tertiary graphic design when he attended LC from 2007-2008. At the end of 2007, Adam won both the Graphic Design and Technical Drawing awards for year eleven. As his skills developed, his ambitions of continuing his graphic design practice required him to apply for university. Adam eventually decided to move to Hobart to attend the University of Tasmania, beginning his bachelor of visual communication in February, 2009.

As soon as Adam moved to Hobart, he was awarded the North Eastern Arts and Crafts association scholarship, as he fulfilled the requirements of the scholarship. This aided him greatly in undertaking his studies. He enrolled in many subjects, including digital imaging, photography, narrative drawing, web design and especially graphic design. Over the years he has learnt many skills that will be necessary to his career as a graphic designer, including proficient use of Adobe Photoshop, Illustrator, Indesign, Premier Pro, After Effects and Wordpress.

Adam’s future ambitions are to emerge from university a confident and capable graphic designer, hopefully able to secure a good financial and artistic future. After his upbringing in the country and subsequent education in the city, his style is broad and fits to whatever the project he undertakes. His cartooning ability ranges from the realistic to the zany, and a broad range of genres including comedy and drama. His ultimate hope is to make an artistic impact on the world, hopefully with both cartooning and graphic design.